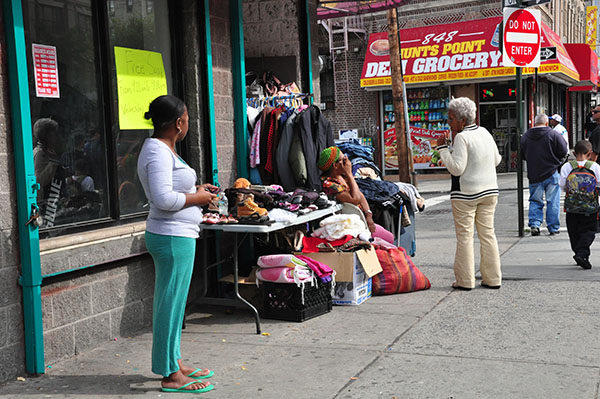 Hunts Point is a notoriously over-planned neighborhood. As the exploration of recent plans on page 15 illustrates, Hunts Point has been both the beneficiary and victim of planning efforts that have left many in the community feeling over-surveyed with inadequate results to show for it. Our client made it clear from the beginning that the community did not need another plan to sit on a shelf. Therefore, the team chose to focus on small-scale, actionable interventions that could be implemented without significant capital outlays.

To this end, we began by conducting an analysis of existing conditions, investigating both the physical and social landscape of Hunts Point in order to begin to identify opportunities for transformative action that can be taken on by local community groups. We interviewed experts within and outside the community. We engaged residents in community preference mapping, gaining valuable information about the key physical assets in the neighborhood, including an understanding of where local people felt safe or unsafe. Through this work, we identified a number of challenges and opportunities.

Through decades of poor land use planning decisions, Hunts Point has become a community beset with vacant and underutilized land and buildings. We chose to look at this as an opportunity: physical space that is not being used to its full potential offers the basic unit for a process of reimagining. It can activate the potential of both the space itself and the community that lives and works around it. Lots and buildings also lend themselves to piecemeal intervention: they can be imagined in connection with one another as a network or tackled one by one — a community garden here, new housing there, a farmers’ market here, a community center there. They offer the opportunity for small-scale intervention that adds up to large-scale transformation.

We’ve been able to produce a vision for the spaces and places that could be reimagined in order to transform Hunts Point into a place that better meets the needs of residents. We’ve also identified potential places to improve connectivity to neighborhood amenities, which are currently cut off from the rest of the community. And we’ve developed recommendations on what form the transformation of spaces could take, while developing datasets that can be used by others seeking to carry this work forward.

We are excited to share our work with you.