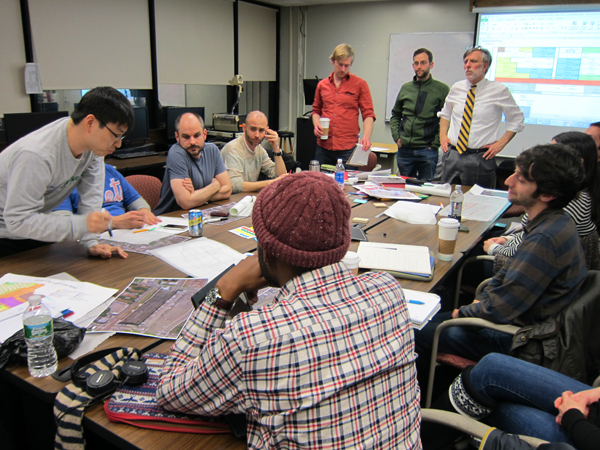 The New Jersey Edge studio seeks to create a plan for a neglected neighborhood on the edge of northern Jersey City and southwest Hoboken. This neighborhood is the home of the Lackawanna Center, a 1.3 million square foot warehouse and the focus of the study. The studio’s client, Emmes Asset Management, seeks to increase occupancy in the Lackawanna Center by repositioning the building as the focal point of the surrounding community.

The warehouse is an industrial behemoth, with a building footprint of 138,224 square feet, eight stories, nearly 22-inch thick floors, heavy-duty loading docks, and old rail connections. The building stands as a reminder of when northern New Jersey was at the epicenter of America’s railroad and shipping industries.

The surrounding neighborhood is typified by disjointed and overlapping jurisdictions and a patchwork of redevelopment plans. The interested parties, Hoboken, Jersey City, and New Jersey Transit, have not addressed the neighborhood as a coherent whole. The result is a maze of strip malls, brownstones, highways, paved overpasses and empty lots, but not a livable community. The New Jersey Edge studio seeks to bridge the edges, both physical and jurisdictional, between the communities in the area.

To recreate the neighborhood, the studio plan proposes subdividing the building to reintegrate it with the existing street grid, allowing for an enhanced pedestrian network. The plan also proposes creating a new economic cluster of vertically integrated food manufacturing and indoor farming firms, as well as a university-sponsored Tech Center.

The New Jersey Edge Studio provides a vision for a cohesive community with revamped human infrastructure, new job opportunities, and a repositioned Lackawanna Center. The building’s tremendous potential can best be taken advantage of by making it the focal point of a reinvigorated neighborhood.