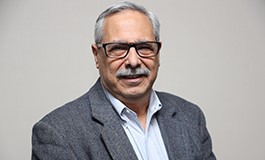 Edwin Meléndez is a Professor of Urban Policy and Planning at Hunter College. He has conducted considerable research in the areas of Puerto Rican and Latino studies, economic development, labor markets, and poverty. In addition to close to a hundred scientific papers and other academic publications, he is the author or editor of thirteen books including State of Puerto Ricans, 2017 (Centro Press, 2017), Puerto Ricans at the Dawn of the New Millennium (Centro Press, 2014) and Latinos in a Changing Society (Praeger, 2007).  In addition, he has served as invited Editor for “Post Disaster Recovery in Puerto Rico and Local Participation,” CENTRO XXXII(3) 2020, “Puerto Rico in Crisis,” Centro XXX (3) 2018, “Pathways to Economic Opportunity,” Centro XXIII (2), 2011, and other Special Issues on Radical America (1989), Hispanic Journal of Behavioral Sciences (1992), Latino Studies Journal (1993), and the New England Journal of Public Policy (1997).

Professor Melendez has an extensive record of community and public service, including numerous appointments to government and community boards. Among other local and national organizations, he was the Director of the Center for Puerto Rican Studies, a member of the Boston School Committee and Chair of its Curriculum and Operations Sub-Committee,  the Chair of the ASPIRA Association National Board, Vice-President of the Board of Directors of UnidosUS (National Council of la Raza), the New York Hurricane Maria Memorial Commission, and serves at the Executive Committee of the Inter-University Program for Latino Research, Secretary of the Board of Directors of the National Puerto Rican Agenda, and the National Advisory Board of the John J. Heldrich Center for Workforce Development.

In addition to numerous academic awards and scholarships, Dr. Edwin Meléndez won the Association of Collegiate Schools of Planning 2019 Edward Blakely Award for support to social justice, urban planning, and development for communities of color. He is also the recipient of the 2016 Advocate Award from Somos El Futuro and the New York State Assembly and Senate Puerto Rican and Hispanic Task Force; the 2016 Honoree of Distinction from the National Conference of Puerto Rican Women, NY Chapter; the 2011 Lifetime Achievement Award in Education from the New York League of Puerto Rican Women; the 2010 Educational Leadership Honoree from the National Puerto Rican Day Parade; and, the 2009 El Diario El Awards.